Remain inside the car at all times.

In the days after TNSTaV was published, a thought occurred to me. In the ten-ish years since the first draft was completed, this thought had never occurred to me before. It waited until it was exactly too late, so, yeah, that figures.

(No, I’m not going to tell you what the thought is. This post is full of disappointment.)

It occurred to me that there’s a complaint that can be made about certain things in the first book. A justifiable complaint. A complaint that I, myself, would probably think to make at some point if I was reading it in somebody else’s book. I stewed over it for a few days, and then I decided to mention it to Derek. I expected him to argue with me, but instead, he made a weird face and said, “Yeah, I was thinking about that the other day.”

Here’s why it bugs me: if you a) notice it (which you probably will, or already have), and b) decide to ask/complain/rail at me about it, I can’t give you a satisfactory answer. I literally can’t. I can’t even explain why I can’t. The whole series is a Jenga tower, and this is the block that would bring the entire structure down. (There might be a bit of hyperbole there, but only a very little bit.) (And no, I haven’t explained it to Derek, either.)

The best answer I can come up with is, “Yes, I did that. No, it’s not something that I would change, even if I could. Why? Because reasons.”

The only other answer I could come up with that didn’t threaten the imminent collapse of the entire infrastructure was, “Just… just bear with me.” (That’s not just a terrible answer, it’s a completely lame answer.)

(I can just envision the social media take on this whole thing: “Author says she can’t defend insert thing here!“)

At this point, all I can do is hope that everybody keeps their arms and legs (and heads) inside the ride until it comes to a full stop. I can’t promise that everything will come to a satisfactory conclusion, but I can promise that that thing isn’t the thing that it appears to be. 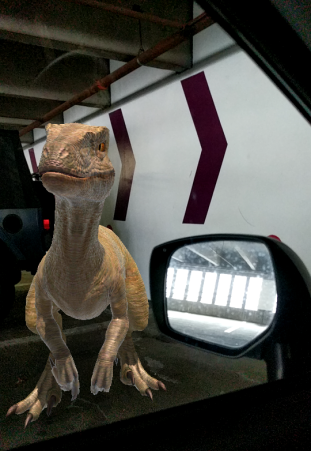 You can see it too, right? Just kidding. I’m totally going to send this to my boss the next time I’m late for work. “I’m sorry, I can’t get out of the car. Because velociraptors.”

I’m a danger to myself and others when I’m sick, because really dumb things suddenly become hilariously funny to me. Like this, for instance.

tagged with There's No Such Thing as Vampires, Writing