The real world drives me nuts.

Back at the day job, and sure enough, I can’t get through the first day without wanting to smash my head into a desk.

It reminded me of something, though. We’re required to disclose any outside employment so that the big bosses can make certain that there are no conflicts of interest lurking in the corner. Ok, great, makes sense. I knew that I would have to disclose something connected to the book, but I wasn’t sure how to fill out the form. It’s set up for situations like, “I work at xyz in my spare time for extra cash, and here’s how much I make.” A few weeks ago, I moseyed on over to HR and talked to a couple of the nice folks down there.

They explained exactly what they needed from me, which boiled down to, “Just the bare facts, and whatever else you’re comfortable disclosing.” I explained that I’d written a book, and asked how much they wanted to know – the title? Publisher? Anything? They shrugged and said, “You just need to tell us that you’re publishing fiction, a rough estimate of how much of your time it takes up, and that’s it.”

Great. Easy-peasy-mac-and-cheesy. I thanked them and was about to leave, when one of them hesitated. It was obvious that she wanted to ask me something, but wasn’t certain if she should. So I paused, looked at her encouragingly, and she said, in a whisper, “The book’s not about this place, is it?”

I laughed. The other HR person laughed her butt off. I said, “Not so you’d recognize it.” That got her to laughing, and then I added, “Of course, I can’t swear that I didn’t use it to work out some…”

She cut in and said, “Blow off some steam?”

I said, “Sure. Steam. I was going to say aggressions, but steam works, too.” She started laughing again, and I thought, Oh, good. It’s not just me.

Because no, I didn’t write about that place… but at the same time, yes, I absolutely did. Because even when the plot, or the world, or the characters, are pure fiction… even then, you’re probably still writing what you know.  When I write about a conflict between characters, it’s probably informed by a conflict I was involved in, or witnessed, in real life. The content may have changed, and the outcome may be different, but I still draw on my observations about how people behave in those situations. The emotions that were evoked, the gestures used, the attitudes displayed. It can be deliberate, but sometimes, it’s entirely unconscious. Sometimes, something pours out onto the page, and it’s only afterward that I realize that it was sparked by something from the past.

Even in the most fantabulous of situations, there’s probably at least one little nugget of reality in there. Somewhere. Lurking in the corners, just begging for psychoanalysis… 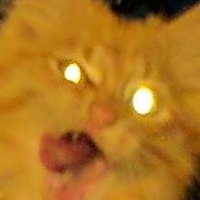 How nuts? This nuts.

tagged with inspiration, There's No Such Thing as Vampires, Writing