First things first: There’s No Such Thing as Vampires is now available in paperback! Yes, it’s a day early, which was unexpected. I mean no, it’s fine, it’s not like all of our plans revolved around tomorrow being release day, right? Ha ha ha HA HA aaaarrrrggg…

Good news, though – you can still preorder on Kindle for only 99¢ today. The Kindle version releases tomorrow, December 20th!

Second thing: This may seem to be a little out of left field, but today has been stressful for more than one reason, and it’s not even noon yet. It’s officially one of those days, and I had some thoughts.

If you have someone (or more than one someone) in your life who supports you, consider taking a moment to think about them. Consciously. Deliberately. Think about all the times they were there for you. All of the times that you completely lost it, had a total meltdown, maybe ate his or her face off even though it wasn’t really their fault, they just happened to be standing in the way when the crazy meltdown train came rocketing through, and yet they understood and supported you anyway, when really they probably should have chucked a [thing you really like] into the basement and then, when you went mindlessly charging down the stairs after it, slammed the door and chained it shut behind you. Maybe thank them, or do something nice for them, just because they’re still hanging around your crazy ass.

Ok, most of that’s really about me, I am seriously difficult to live with, I’m kind of like a wolverine that goes through periods of hibernation and then suddenly explodes into a frenzy, ha ha ha HA HA aaarrrrggg.

Seriously, though, folks… thank you. All of you. Whether you’re just occasionally perusing my blog, following on Facebook, peering at me dubiously on Twitter, or reading the book, I appreciate the bits of your time that you’ve granted me. There are a million other things you could be doing right now, and even if you were only here for a few moments, those few moments are an amazing gift to me. 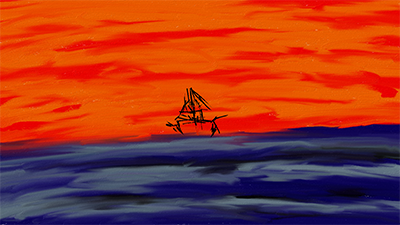 I found this last night. I’d completely forgotten it existed – it’s something else I doodled in a meeting years ago. That has to be the worst ship anyone’s ever drawn, but I still like it. It’s like I’m making refrigerator pictures for myself.

tagged with paperback, preorder, There's No Such Thing as Vampires