Where do we go from here?

Ok. First book published – check. It’s out of my hands and into yours; what you do (or don’t do) with it is entirely up to you!

What’s next? Finishing the second book, and then publishing it. Ideally, I’d like to have one out each year, around the same time. A little earlier or later, maybe… this “right before Xmas” thing threatens my sanity. (But let’s be real… food making contact with other food on a plate threatens my sanity, so…)

I’m not entirely certain how many books there will be in this series. I believe that it’s a trilogy, but I’m not going to guarantee it. The minute I do, it’ll turn into four books. Or five. Given what’s happened (and not happened) in book 2, it’s safe to say that there will be at least three.

What about this blog? I’ll probably slow the pace down a bit while I concentrate on getting the first draft completed for #2. I’ll probably also start mixing it up a little — I’ll still write about the books, and about writing in general, but I may toss in some other topics along the way.

After that? I have some ideas. About halfway through book 2, one of the minor-ish characters tapped me on the shoulder and said, “Psst… I should be the star of the spin-off series.” My first impulse was to scream, “WHO says there’s going to be a bloody spin-off?!” But… well, actually, that makes a lot of sense. And it could be a good idea. But I’m going to concentrate on the book that I need to write now, thankyouverymuch. 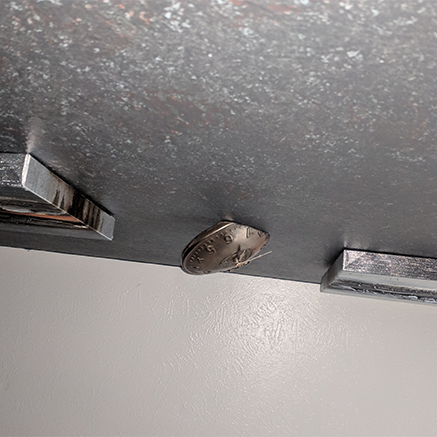 That’s a clock on the wall above the bed. This is me, staring up at it. It’s been there for years, and I hardly ever thought about it. I’ve recently become obsessed with the idea that it’s suddenly going to fall down and crack me right in the head. Think that’s a metaphor for something?

tagged with books, There's No Such Thing as Vampires, Writing