Don’t feed the trolls (in your head).

Just before release day, I had a thought. See, I know me, and I know how I am, and I needed to know what other people say about book reviews. I obsess over things like the cats obsess over Derek’s shoes (don’t ask me, it’s this whole thing) and that can be bad. Like, really, really bad.

I believe that I’m not much different from other people… but then, I also believe that one of the cats has been working for years to erode my credibility and ultimately have me killed, so I could be wrong. But here’s the thing:

1. Give me a compliment, and I will rationalize it away. Always. “You’re just being nice.” “You’re related to me, you have to say that.” “You’re afraid of me, you’re just saying that because you don’t want me to pounce on you and tear you to pieces and then cover the pieces in mustard and eat them.”

2. Say something negative and I will grab that shit and cuddle it close to my heart forever and ever and ever. There will be at least one phrase that will repeat itself in my brain over and over and over. No matter how much I tell myself to forget about it, I will never forget about it. No matter how blatantly untrue it is, I will never stop secretly wondering if some of it is true. Or all of it. Or I’ll just flat-out believe it, despite all evidence to the contrary.

People can say nice things all day long, but it’s always the bad shit you remember. At least, that’s how it’s always been for me.

I try not to be that way, but it’s hard to get that voice in your head to quit saying negative stuff. It’s easy to believe the person who says your stuff sucks. It’s really hard to believe the person who says it’s wonderful. Read too many negative reviews, and that voice could kill every chance I have of ever finishing this series, let alone writing another book. Because chances are, long-term, I’ll believe the bad reviews and brush aside the positive ones.

I was relieved when a number of people gave this advice: DON’T READ REVIEWS.

I was also kind of surprised, because let’s face it — nobody’s perfect. I’m certainly not. And I have a lot of room to improve. How do you figure out what you need to improve on if you don’t read what people are saying?

Luckily, they had advice for that, too: HAVE SOMEONE ELSE READ THEM FOR YOU. Find somebody who’s familiar with your work (and has good judgment) and let them weed out the stuff that’s just mean or nasty or unhelpful. Ask them to store up the occasional super-positive comment and toss it at you when things get hard. (I’ll probably still rationalize it away, but it will help a little.) Have them sift through the minefield and tease out the criticism that’s actually constructive and present it to you in a way that won’t torpedo every single thing you’ve ever contemplated doing.

Resisting the urge is unbelievably difficult, but really, it’s probably the only way to keep on keeping on (unless every single person everywhere loves every word you write, and if you’re that guy, I don’t want to hear it. Take your perfection elsewhere and leave us imperfect mortals to our toil.) 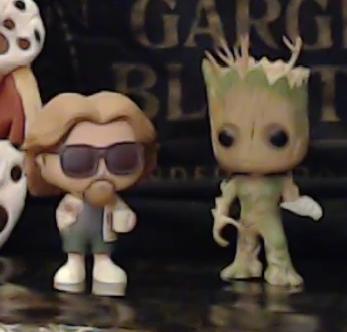 OK, I did say pics, plural, so here’s another. You can’t tell me you wouldn’t want to see this.