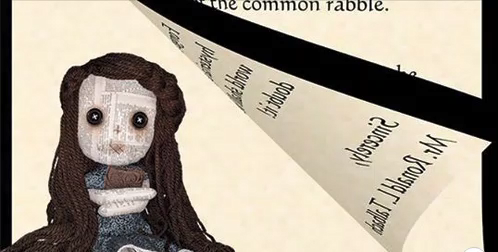 My first thought was, “All of them.” Then I hesitated, and I realized that I’d cruised right by the important word in that sentence.

I never wanted this. Not in the way they meant. Not once did I sit down and think, “Hey, of all the random things in the world that I could want to do, what I want is to write stories.” Addressing the question a bit more directly, I never thought, “Holy crap this [art thing] is so good, I want to do that too!” It wasn’t something that I chose to do, it was something I just did. Had to do. Couldn’t help myself. And it ties right back into my first, instinctive answer, because I’ve been doing it all my life. Constantly. Whether I meant to or not.

Those television shows you’ve watched? Those movies you’ve seen? All those books you’ve read? Some of them have characters you’ve never heard of, situations that you didn’t know occurred, and plot lines that you are completely unaware of… because they only exist in my head.

Do you do that, too? I’m betting that you do. A lot, a little — I suspect that we all do it to some extent. How cool would it be to have mutant powers and go to a school full of kids who also have mutant powers, and who actually get what you’re going through? Well, that school exists… in fiction… and it’s the easiest thing in the world to imagine yourself right there with them. To live a whole different life in your head.

I still sometimes imagine myself into a plot, but usually I’m just creating new characters and subplots that fit into the existing ones. Sometimes I write them down. Sometimes, some of those things mutate and end up in entirely new stories. The point is, I literally can’t stop doing it. Hell, when I was a kid, I invented new characters and a whole new history for the bloody Smurfs.

There’s a line. One person stops and marvels at the sight of something, and then they move on. Maybe they tell someone about it later, maybe they don’t, but it will always be part of their memories. Another person sees the same thing and immediately has to take a picture of it. Or paint or draw it. Or write a story about it. Or sing about it. They take what happened in their heads when they saw that something — their interpretation, their emotions — and give form to it. When you take the thing that only exists in your head and insist on bringing it out into the world, where other people can see it, too — that’s when you step over the line.

It really doesn’t matter whether the thing you create is good, bad, or indifferent. For one thing, art is subjective, and chances are, someone will love that thing you made. Every time you do it… well, that’s called practicing, isn’t it? Practice doesn’t usually make perfect, but it does lead to improvement. But the truly important part is taking a step over that line and deciding that you’re going to live there. It can be scary. It’s absolutely an act of courage. And whether you become rich and famous or simply labor on in obscurity, it’s worth it. You’re the only person who can show the world that amazing thing in your head.

Or watch it on Twitch with my awkward commentary at the end.