Happy V-day! (Terrible holiday, in my opinion, but ymmv. Plus, I have to admit that I got stellar loot this year.)

The other day, during my Twitch stream, someone asked if TNSTaV has a lot of plot twists. I tried to answer as honestly as I know how (without giving anything away), but it made me think about it quite a bit. My knee-jerk reaction is, “No!” — but I’m not sure that very many people would agree with me.

Here’s the thing: I don’t plan plot twists. They just sort of happen along the way, but I also never really think of them as “plot twists.” It’s just… stuff that happens. I’ll be motoring along, following a train of thought, and then something will hit me. It’s not, “I should make this happen!” — it’s more like, “And this is what happens next. Surprise!”

Sometimes, I get no warning at all. Once, while writing a section of the second book, it hit me as I was typing the thing, and nobody could be more surprised than I was. I wish I could be more specific, but I can’t. Not yet, anyway. Maybe someday, after the second book comes out and the spoiler statute of limitations has expired. (Which I generally think should be something along the lines of 50 years, but that’s probably unreasonable.)

More commonly, whatever-it-is will hit me half-a-chapter or so before the thing happens. It’s like walking through a hedge maze, turning a corner, and seeing the exit. You still have to get from here to there, but you can see what’s at the end — and it’s not what you thought it would be.

The whole series is like that. Another question I was asked was whether I plan everything out, or just make it up as I go along. As you may or may not know, the answer is way more “b” and not so much “a”. There is a higher-level plot, for lack of a better phrase. For that piece, I know who the primary players are and what they want… but that’s the light at the end of the tunnel, and there’s a whole lot of really dark-ass tunnel between here and there.

I’ve come to look at it this way: Book one hands the reader a flashlight with a narrow beam. You can only see what the light illuminates, and you can’t move the flashlight. The second book widens the beam quite a bit, but there’s still lots going on that you can’t see yet. The third book will widen it further still — enough to shine a clearer light on the games that were being played behind closed doors, and expose some hidden motivations — but there will always be things going on out there in the darkness.

If I haven’t lost my mind by the time this series is finished, and a spin-off still seems like a good idea, some of those things might get their turn in the light… but who knows? This tunnel is long and dark and full of terrors.

This is a bit of a tease, but… I’m really curious if the character I’m considering for the potential spin-off protagonist will be obvious to you, once you’ve read the second book. 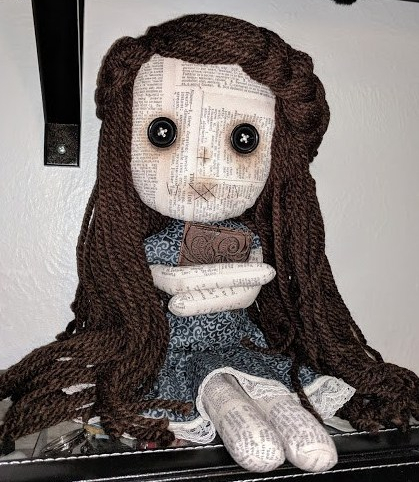 My V-day present. She named herself Emma, and she comes from Moody Voodies, who make some seriously kick-ass dolls. The book! The hair! The book! (If you decide to check them out online, do them a favor — they’re a small business and VERY busy, so please read their FAQs if you’re thinking about contacting them.)